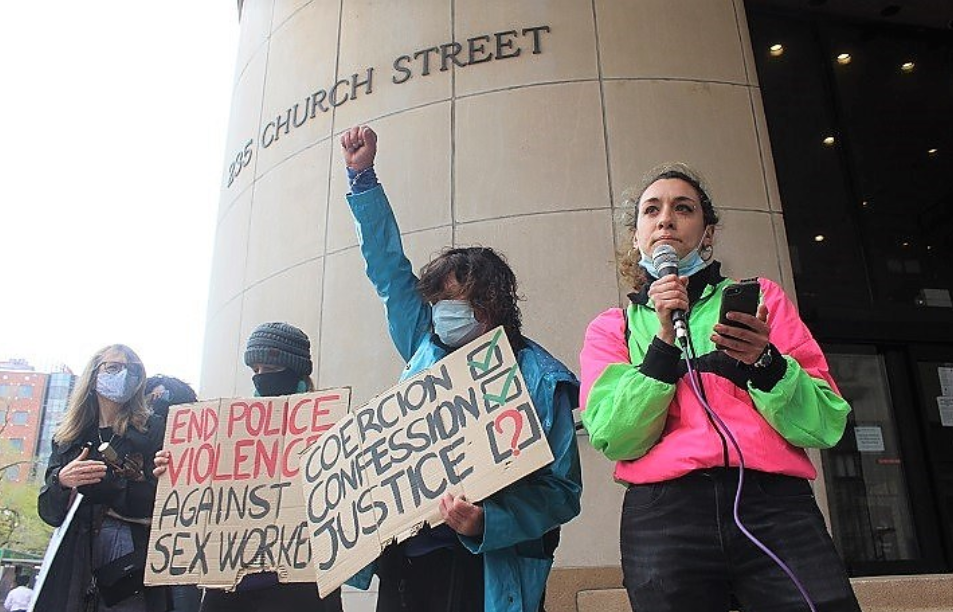 On April 21, several dozen SWAN members and supporters rallied outside of the state courthouse at 235 Church St.  to protest the State’s Attorney’s decision to not prosecute the case against former NHPD officer Gary Gamarra.

Gamarra took advantage of his power and authority as a police officer to repeatedly coerce Fair Haven sex workers into non-consensual sex over the course of more than a year. He extorted sexual acts through targeted harassment, intimidation, and threat of arrest, making his victims feel that they would face legal repercussions if they refused. Several women reported these abuses to SWAN’s Executive Director Beatrice Codianni, who brought the complaints to the New Haven Police Department Internal Affairs Division.

Despite fear of retaliation, two women bravely came forward and collaborated with two separate Internal Affairs investigations. Officers were able to identify Gamarra as the perpetrator in both investigations because the two women separately provided matching descriptions of his physical appearance, his car, and the manner in which he coerced them into sex. The Internal Affairs investigation report obtained and made public by the New Haven Independent show that after lying repeatedly to investigators, Gamarra finally admitted to having sex with the two women.

Despite Gamarra’s confession, the State’s Attorney’s office has decided not to prosecute the case, citing insufficient evidence. To us, the evidence is clear: repeated harassment and intimidation by someone with the power to arrest means coercion, and coercion means rape. This decision sends the message that sex workers who are victim of sexual violence cannot expect to see justice, and contributes to a climate of impunity for violence against sex workers, often perpetrated by law enforcement.

“SWAN holds trauma-informed groups for members who have been victims of violence. It is disturbing to hear how many of our members have stories about being sexually assaulted by police officers,” said Codianni. “Many of them do not want to meet with the Police Department’s Internal Affairs officers because after having been sexually assaulted by someone who was supposed to protect them, they do not trust the police.” A survey conducted among SWAN members in 2019 found that two-thirds of respondents had felt unsafe during interactions with police.

We must end the stigma against sex work that perpetuates this abuse. We must hold police officers accountable for the harassment and assault that the most marginalized sex workers in our community are regularly subject to. We must ensure that abusers like Gary Gamarra are barred from serving as police officers, in New Haven or anywhere else. And we must decriminalize sex work to prevent police from using threat of arrest to commit abuses with impunity, and to empower sex workers to report violence and abuses without fear of legal consequences.

We will be holding a rally in front of the Superior Court, where the State’s Attorney’s office is located, to reiterate the following: Coerced sex under threat of arrest is rape. Sex workers deserve protection against abuse and violence. Police officers must be held accountable when they harm community members. Sex work is work and should not be criminalized.

SWAN stands for decriminalization of sex work, abolition of the unjust criminal system, and dignity for all.